Recycling – An essential measure for the circular economy

Plastic waste covers beaches and rivers or swells from the burst belly of a dead fish – such images are currently being shown around the world. Consequently, the image of plastics has never been as negative as it is today, and discussions regarding the use of plastics have rarely been so emotionally charged.  However, the fact is that, with perhaps the exception of a few indigenous peoples, not one of the 7.5 billion inhabitants of this planet could live a normal life without plastic, regardless of whether they are conscious of this or not. After all, plastics has for some considerable time now been used in more applications than toys, household appliances and packaging. Plastics also provide important – indeed almost essential – solutions to problems in the transportation and electronics industries and the medical sector. What are the ramifications of the present situation for the plastics industry, and what options does recycling offer today?

The plastics industry is defending itself against accusations, but it must present concepts for the future and demonstrate that plastic and environmental protection are compatible. Issues such as waste collection systems and collection rates, recovery methods, recycling and the circular economy are now more center stage than ever before. Unsurprising, therefore, that the circular economy is one of the leading issues at this year’s international K 2019 trade fair (October 16 – 23, 2019 in Düsseldorf, Germany). Visitors will see a variety of proposals and solutions relating to this “green” topic. The industry has achieved much in recent years, as demonstrated in several examples.

The demand for plastics continues to rise – despite, it would seem, its poor image. In its report “Plastics – The Facts”, Plastics Europe pointed out that the production of plastics worldwide was 348 million tons in 2017, around 4% higher than in 2016. In Europe, the output of the 28 EU countries plus Norway and Switzerland rose from 60 to 64.4 million tons (up 7%). Europe accounts for around a fifth of global production, placing it second among producers, after China (29%) and just ahead of the NAFTA region (18%).

Although a degree of consolidation has led to a reduction in the number of companies in the European plastics industry to around 60,000 since the last K event, figures for those employed in the sector have increased, with 1.5 million working in the plastics industry and generating stable sales of about EUR 350 billion in 2017.

Almost 40% of plastics produced, indeed the largest proportion, is sourced by the packaging industry where it provides important protection during transportation and ensures the shelf life of goods, making a substantial contribution to environmental protection in the process. In the packaging industry in particular, plastic is frequently the material of choice when it comes to the resource-efficient provision of products and services. Plastics mainly reduce the consumption of resources in the usage phase, a fact which, according to BLV GmbH (Frankfurt), is frequently overlooked when the question of resource conservation arises solely in relation to the handling of waste.

This is also the case when it comes to the second most important customer for plastics: the construction industry. This sector consumes almost 20% of all plastics. The automotive industry uses around 10% of output, achieving the highest level of growth in a comparison of 2016 and 2017. The advantageous of plastics are particularly evident in the car, given their lightness and adaptability in a variety of applications. Their impact on the reduction of the carbon footprint is decisive.

A look at different consumer sectors clearly indicates that the usage duration for plastic products differs greatly, and this in turn influences recycling rates and options. However, as Plastics Europe has established in its study, the appreciation that plastics is much too valuable to simply discard it at the end of its service life, has grown in Europe. Recycling of plastic waste increased by almost 80% in the ten years between 2006 and 2016. At 40.9%, plastic packaging now accounts for the majority of recycling, followed by energetic recovery at 38.8%.

The compulsion to act that is born of the public perception of plastic waste has contributed to a range of new laws governing higher recycling rates. Following China’s lead, other Southeast Asian countries (and Taiwan in December 2018) have imposed import restrictions on plastic waste. Landfill bans on plastic waste are already in force in ten European countries.

Following its prohibition of plastic bags on January 1, 2019, Italy also imposed a ban on cotton buds made of plastic. Legislation with similar rules has been drafted and should become law throughout the EU in 2021. Criticism is also directed at other disposable plastic items such as cutlery, plates, drinking straws, stirrers and balloon sticks.  Together with fishing gear, these account for 70% of the 8 million tons of plastic that end up in the oceans every year. The EU Commission has proposed requiring that these objects be manufactured from environmentally friendlier, more perishable materials in future. Disposable beverage cups made of plastic should only be permitted if the lid and seal are permanently attached components.

RPC Tedeco-Gizeh, the only British manufacturer of vending machine cups, has adopted one solution for the recycling of plastic cups. Together with BPI Recycling, its affiliated company, it offers all operators of drinks machines a collection service, recycling the cups recovered to manufacture new products. One exemplary initiative deserving of mention is STOP (Stop Ocean Plastics). Launched by Borealis AG and SYSTEMIQ in conjunction with the Norwegian government, Nova Chemicals, Borouge and Veolia, STOP has now gained a new strategic partner – namely Nestle, the world’s largest food company. The common goal here is to make a pioneering contribution to the prevention of marine pollution in Southeast Asia. Nestle has also pledged to ensure that all its packaging is recyclable or reusable by 2025.

PET bottles are the perfect example of packaging items that are perfectly recyclable, mainly on a bottle-to-bottle basis and not infrequently to a rate of 100%. The proportion of PET bottles recycled in Europe in 2017 totaled 58.2% percent. This being said, striking differences are evident between countries. Whereas recycling rates of up to 95% are recorded in Germany and Finland, a study conducted by PETcore indicates that some Mediterranean countries struggle to achieve 40%. Vöslauer, the Austrian mineral water producer, switched to 100% R-PET bottles at the beginning of 2019 for all its water varieties, and this was extended to its flavored range in April. Vöslauer itself reports that it has even succeeded in reducing material consumption by around one quarter when compared to other R-PET bottles. Coca-Cola has also been very active for years now in efforts to offer customers more sustainable bottle variants. The corporation is now taking further steps with regard to chemical recycling of PET packaging which is then used to manufacturer new bottles. A PET upcycling plant is currently being established in the Netherlands in cooperation with the Dutch start-up Ioniqa Technologies in Eindhoven.

Effective collection and recovery systems have also existed for some time now for PVC window profiles, and the volumes involved here have increased from year to year. Within the Rewindo recycling initiative, an amalgamation of leading German plastic profile manufacturers succeeded in 2015 in processing over 27,000 tons of recycled material from old windows, roller blinds and doors and refeeding it back into the production process. In conjunction with waste from the plastic profile cutting required for tolerance production of new plastic windows, over 100,000 tons of recovered PVC found its way back onto the market. Rewindo says that this saves resources and energy and contributes to a reduction in the carbon footprint.

There are, of course, numerous other functional recycling systems (e.g. for PE bottle crates) which cannot all be mentioned here, but it can generally be said that the purer a recovered plastic is, the better it can be reprocessed for new products.  Genuine cases of production waste have been practically eliminated. This is either returned directly to the current production process or forwarded to specialized processing companies. One of these is Hoffmann + Voss GmbH in Viersen/Germany. It specializes in the treatment of engineering plastic waste, refining it to produce high-quality recompounds which are used in the automotive industry in place of new materials.

Reprocessing is always more difficult where mixed plastic waste is involved, but even here functional concepts already exist, as evident in Hahn Kunststoffe GmbH in Hahn/Germany. Every year, around 50,000 tons of waste from the mixed fraction are given a new lease of life in the form of railings, noise barriers, posts, bollards, flower boxes, waste containers and playground or municipal furnishings.

Although these recovery concepts are effective and interesting in themselves, the question does arise as to the practicality of processing all residual plastics, or whether it would be better to use those which are difficult to recover as fuel to replace fossil resources in incineration plants.

Recycling raw materials as an alternative

The issue of recycling raw materials and the recovery of unmixed initial monomers has garnered greater attention recently, with more and more companies launching research and development projects, such as Coca-Cola which exploits chemical recycling of PET packaging. Sabic, the chemical corporation, recently announced that, in conjunction with Plastic Energy, the British specialists in London, it would be establishing a plant in the Netherlands which would process commercial volumes of mixed plastic waste to produce oil which, in turn, would then be used as a raw material for new plastics. Starting material recovered in this manner conserves fossil resources and is a good example of a functioning circular economy. However, such projects are still in their infancy and must establish themselves.

Circular concepts already exist in which newly filled, colored or specific additive compounds are created from plastic waste and can be used by plastics processors to manufacture new substitutes for many products. Minimal or absolutely no adjustments need be made for the use of so-called recompounds, as manufacturers of injection molding and extrusion plants continually emphasize.

The importance of these efforts is demonstrated in the latest investments made by major raw material manufacturers. For example, 2016 saw the takeover of mtm plastics GmbH in Niedergebra by Borealis. The former has a plant capacity of 30,000 tons per year and manufactures recycled polyolefins from mixed plastic waste.

Together with the processing firm Suez, LyondellBasell took control of QCP B.V. in Geleen/Netherlands last year, a company whose state-of-the-art processing plant has a current capacity 35,000 tons per annum and manufactures PE and PP recompounds from post-consumer packaging. 2018 also saw the purchase by Albis of Wipag GmbH, the recycler and closed loop process specialist from Neuburg. Having specialized in the automotive sector for decades, Wipag has now even developed a process for recovering the robust material CFRP and enabling its reuse.

Recycling is not only a designated product category at K 2019, but is also discussed in the K Specials, as is the entire field of Circular Economy. The special show “Plastics shape the Future” aims to involve both politicians and socially relevant groups, while the “Science Campus” of K 2019 stands for the dialogue between science and business.

For further information about K 2019:

Charlotte, NC – April 2013 – The recycling specialists at Westeria Fördertechnik GmbH have optimized their product line of pusher plate bins. Designed as proportioning or feed bins, these bins are used as a preliminary […]

Granulation and size reduction of plastics such as scrap and rejects from blow and injection molding or extrusion processes requires a lot of knowledge and experience. ZERMA has a long history in the design and implementation […]

R&B offers the MAX Extruder, a complete line of single-screw extruder machines ranging in size from 1″ to 10″ in diameter. The MAX Extruder can be utilized as a stand-alone extrusion machine or as part […] 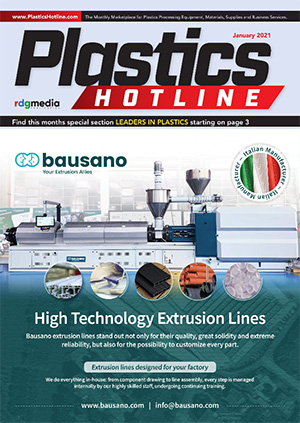